Tough Cell is a high-performance geocell, structured in a 3D honeycomb formation of polymeric material. The Tough Cell cellular confinement system ensures equal load distribution, increases the pavement layer strength and reinforces the infill material of low strength and easily sourced aggregates such as sand, local soils or recycled materials. Tough Cell Geocells are fabricated from a new Novel Polymeric Alloy called Neoloy®; specifically developed for geocells that have been found superior in comparison to any other geocell or cellular confinement product. Tough Cell allows you to build more durable roads, while reducing up to 60% of your project’s Total Cost of Ownership (TCO). 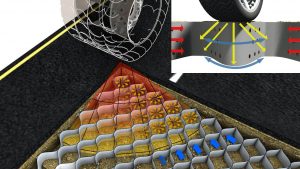 Tough Cell has a patterned structure of geocells designed to distribute vertical load upon a larger area, therefore reduce the strain on one spot and maximize the load bearing capacity of the structure This mechanism is referred to as “the beam effect”. When loading vertically on top of the geocell, a semi-rigid slab is formed over the soft soil, distributing the load evenly and decreasing the stress to the subgrade. This effect was carefully and vastly tested at the University of Kansas and the Indian Institute of Technology, Madras. 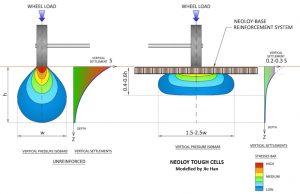 The first cellular confinement systems were developed by the US Corps of Engineers for tactical military use. The initial 3D honeycomb grids were made from aluminum and its purpose was to distribute vertical loads and improve the bearing capacity of soft soils by using materials like the sand in beachheads as infill and create temporary passageways for military vehicles and supplies. In the late 1970’s, the aluminum was replaced by high density polyethylene (HDPE) polymer due to its relatively moderate cost and the flexibility it afforded in packaging the materials for shipment and in their deployment in the field. Road reinforcement applications required a solution with proven long-term durability, suitable for continuous heavy load stresses that are common in busy highways, railways ports and airports.

In 2005, a visionary R&D program was undertaken to compound a nano-polymeric engineering alloy to meet the long-lasting performance required for public transportation and DOT applications. The result was Neoloy®- a Novel Polymeric Alloy (NPA) of polyester/polyamide nano-fibers dispersed in a polyethylene matrix, developed to improve the long-term stiffness and Long Term Dimensional Stability (LTDS) of the geocell. Neoloy is a nano-technology material that combines the ductility of polyethylene with the stability and resistance of polyamides, manufactured under patented processes.

Incorporating Geocells in Existing Pavement Design Methods
Design for geocell base reinforcement of pavements and/or subgrade stabilization is based on the resilient modulus of the pavement structures. Based on comprehensive research performed on NPA geocells, the proven values were used to establish geocell modelling and integrate them into standard Mechanistic-Empirical design methods, such as the Layered Elastic Model. This section described the design methods used for NPA geocells and published by international standard design guides, such as the Netherlands and ISO.

Confining soil in the Tough Cell honeycomb like geometry is what leads to a strong structure even when using soft soils.