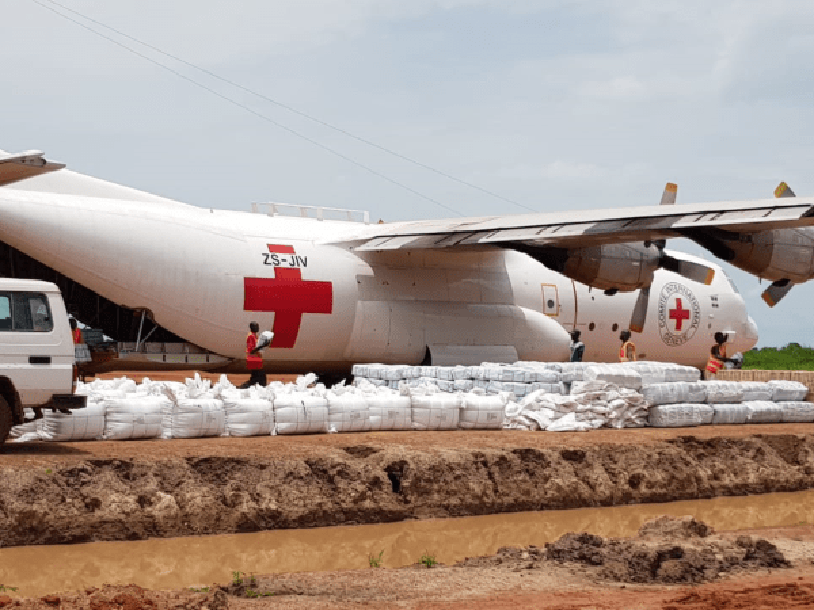 UN Chose Neoloy to Stabilize Ground for Air-based Aid. The Neoloy Geocell airstrip rehabilitation provides a stable base for aid operations in an impoverished region, facilitating delivery to millions of people in food crisis and literally helping the UN save lives.

UNOPS (United Nations Office of Project Services) needed to rehabilitate the Rubkona airfield: taxiway, apron and access roads (including drainage) as well as double the runway size to accommodate larger aircraft (e.g., C130 Hercules). This was a lifesaving mission to guarantee steady airborne deliveries of essential aid to millions of people vulnerable to insecurity, displacement, food shortages and disease.

In a competitive international tender the UN chose the PRS solution. The PRS Engineering detailed pavement analysis and design was a critical factor in their UN decision. The report proved how Neoloy Geocells were the optimized solution for the project conditions:

The airfield design consists of a formation level and in-situ material roadbed. The Neoloy Geocell were installed over the entire area of the airfield with significant overfill. The airstrip was basically constructed from sand, with somewhat higher quality imported Murram sandy-gravel infill limited to the wearing course.

The optimized solution required for reliable heavy-duty use was based on the following geocell engineering parameters:

The high reinforcement factor of Neoloy Geocells optimized the design of the airfield. Local soil was used for structural infill, while minimizing the need for imported gravel. This not only reduced construction time, it also made the project very cost-effective, sustainable and low maintenance.

In terms of manufacturing and logistics, PRS was able to deliver the entire quantity of several hundred thousand sqm within 10 weeks to Mombasa Port to meet the UN’s urgent needs. 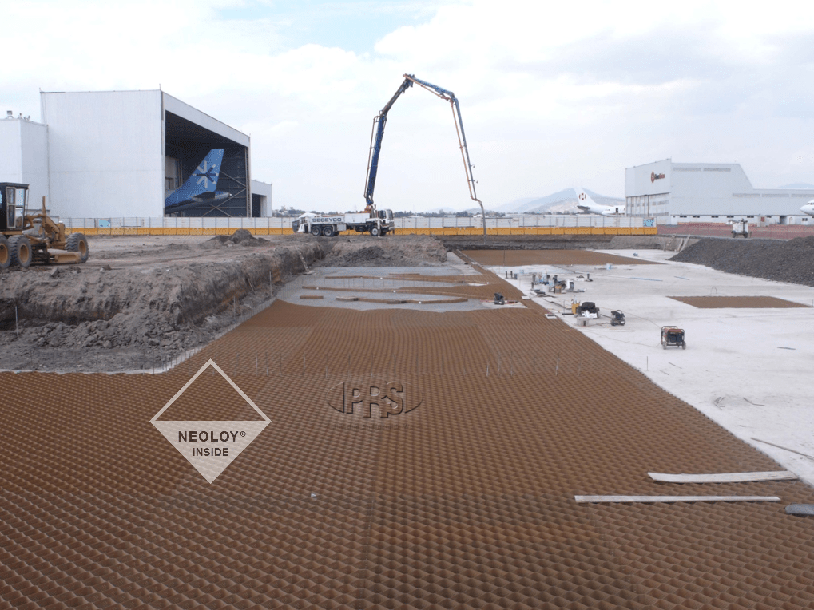 Mexico City’s international airport was built over a lake; the soil is expansive clay with water content approaching 200%. Settlement is a severe problem and several airport runways necessitated a 4m asphalt layer thickness. A recently constructed airport platform using a conventional pavement was expected to settle 3 cm at the 3 vertical loading points of the airplane over two years. In fact it sank 3 cm in just two months!

Interjet airline needed to resolve this problem for the construction of a new airport platform – including apron, pavement reinforcement and working platform stabilization – for maintenance facilities of their A-320 airplane fleets. They asked Ancora Ingenieria, a leading pavement designer, for a solution to distribute the loads of the structural pavement over the problematic soil.

Soil excavation was ineffective by itself. Very thick concrete and asphalt layers were prohibitively expensive. Concrete at the subbase layer was subject to cracking from differential settlement. Ancora turned to Innovater for a geocell-based solution. After intensive technical reviews and engineering proofs between Neoloy. and an HDPE-based geocell, Ancora decided that Neoloy Geocells were the best possible solution.

Neoloy Geocell was chosen as the only practical solution to the severe settlement and saturated soils (see illustrations above). After excavating 185 cm of subgrade, a working platform was constructed of 330-120-C 15cm high Neoloy filled with lean concrete. The “beam effect” of Neoloy Geocells acts as a semi-rigid platform over the soft subgrade to stabilize the subgrade to support the pavement structure.

Over a 125 cm subbase layer of tezontle aggregate (volcanic-porous rock average size 2”), another layer of Neoloy (12 cm height) was installed in the base layer and infilled with hydraulically bound materials (HBM). Compaction to 98-100% took much less repetitions than conventional construction materials. The surface layer was a thin 10 cm of asphalt over a 15 cm cement stabilized base.

Performance has been beyond expectations: Measurements undertaken by the airport authorities after 1.5 years showed zero settlement in the Neoloy reinforced pavement at the 3 loading points of the aircraft wheels! 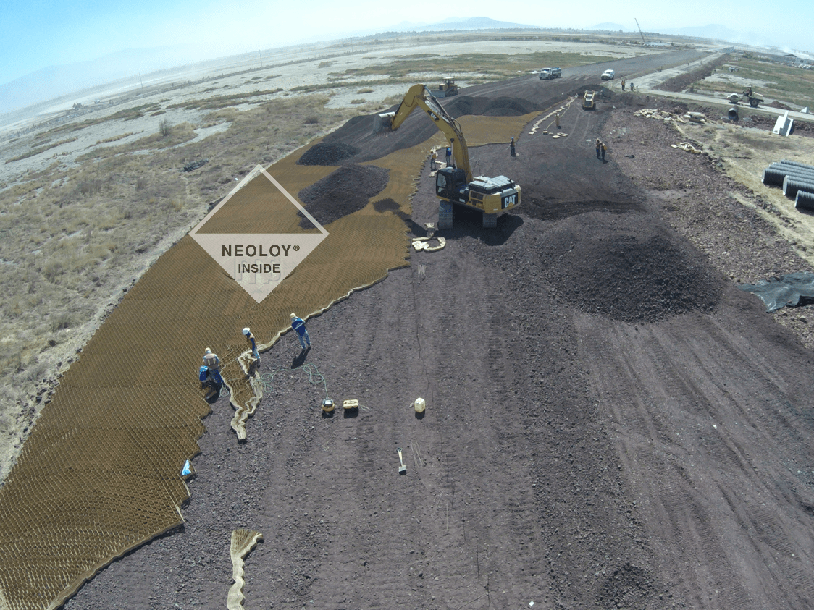 This is the challenge facing the planners of the $9.5 billion NAICM (New International Airport Mexico City) project. The plan for the New Mexico City Airport is to be one of the largest, most futuristic and sustainable airports in the world. The project involves an international consortium of designers, engineers and a lot of national pride.

But the question was how to build one of the world’s most ambitious airports on unstable, saturated and sinking soil (CBR < 1%)? British architect Lord Norman Foster, leading one of the international design firms stated: “the soil has a high-water content and has little capacity to support large loads. In addition, the area is seismic, and the effects of ground movement are magnified by the soil type in the area. Finally, the site is subject to substantial settlement over time, from groundwater extraction for the city’s drinking water supply.”

Other Conventional Solutions Failed After 4 Months of Field Testing

Conventional construction and soil stabilization methods would simply not work in this terrain or are too expensive. The NAICM engineering authorities conducted a 4-month comparison test of several different soil stabilization solutions, such as multiple layers of geogrids, other geosynthetics products and other conventional solutions. At the end of this testing period the results were clear – after hundreds of passes of heavily loaded (45 ton) truck traffic over the Neoloy Geocells, the onsite demonstration section showed no surface deformation or potholes and no settlement.

Neoloy Geocells are the only qualified solution for soil reinforcement in the New Mexico City Airport.  The NAICM solution included integration of a “sacrificial” geogrid layer under the Neoloy Geocell. This acts as a stable working platform, which improves the performance of the geocell installed above it.  Quality testing proved that structural layer stiffness and modulus increased by a factor of 3.5x, even though a lower quality infill material was utilized.In addition, this innovative technology allowed the use of lightweight local volcanic rock called ‘Tezontle’ as infill material, which saved construction time and lowered the weight of the overall pavement structure, a critical factor in the construction.

Neoloy Geocells can be installed in all-weather conditions. According to Mexico’s Transportation Minister, it allowed construction during the rainy seasons, saving about ONE year of construction time. In his brief to the press, he stated that this “innovative technology enabled one of the most ambitious projects in the world to become a reality”.